My experience with the Olympus OM-D EM5

I do like the OM-D on many counts, and yet there are quirks which really can put a dent in the workflow.

Today, everybody seems to be a photographer, where digital photography has empowered just about anyone, whether one chooses an expensive DSLR or rangefinder, right down to a modern smartphone. The immediacy of the digital media has changed the rules of photography, where the careful handling of film and the anticipation of developing prints or slides used to be the name of the game. Cameras were not easily accessible either, where quality optics could set one back by a lifetime’s earnings. Today, digital camera systems are no longer as expensive as before, depending on the needs of the user.

I used to shoot on medium format (120 or 220 film), using the Bronica 645 and the Mamiyaflex C220, and even an antiquated large format view camera. Unlike 35mm film in cartridges, 120 film needed careful handling in the dark, to load them into the mechanical recess of the medium-format camera. For experienced photographers in those days, we would be amazed at how they knew light, and could set f-stops and shutter speeds without needing to use a light meter. For the rest of us, carrying a light meter was necessary, since there was no easy way to know if the shot was correctly, under-, or over-exposed until a week or two later, unlike digital cameras today.

In the old days, having more energy and stable hands, it was possible for me to grapple with the medium-format camera even hand-held, without the need for a tripod. However, having gone on a bit in life and with years, the hands are not as steady as before, and certainly the spine is not as sturdy to take the heavy load of some cameras.

Therefore, having researched the field, the Olympus OM-D EM5 seems to offer the best compromise – great image quality despite being “only” a micro 4/3 camera rather than an APS-C or full frame camera, fast AF, great in-body image stabilization, weather-sealed body, light enough, and have a nice spread of lenses to choose from. I used the Fujifilm X100 – a great APS-C camera with nice fixed lens, but no image stabilization.

Having now used the OM-D in the field and about, I know its in-body image stabilization is really a great feature compared to many of its competitors. With an in-body image stabilization, I can use just about any lens, manual or AF, with the camera, and the OM-D will stabilize the image. This is quite unlike the Lumix GH2 (which I use as well), which requires stabilized lenses, which means that third-party manual lenses such as the Voigtlander 17mm F0.95 would not be stabilized, neither would Lumix’s own 20mm or 14mm pancake lenses. The OM-D is great for me because I do not need to concern myself when shooting in outdoors or low-light, knowing that the IBIS in-body stabilization will help me get usable shots most of the time. In fact, with the IBIS stabilization, OM-D videos have that “steadicam” look, and look even better when using DSLR rigs to stabilize further.

The lenses available to the OM-D are great to work with as well, from super-fast lenses such as the Voigtlander F0.95 manual lenses (chunky and heavy though), to tiny pancake lenses from Lumix, to a variety of zoom lenses, including Olympus’ own weather-sealed 12-50mm zoom lens. I enjoy working with the Lumix 25mm F1.4 ASPH (Leica DG Summilux), the Lumix 14mm F2.5, the Olympus Zuiko 45mm F1.8, the Olympus Zuiko 12mm F2, the Lumix G X Vario 12-35mm F2.8 zoom lens, and the Voigtlander 17mm F0.95 lens (a great macro lens too).

What are some of the things I dislike about the OM-D? Not too challenging, but are quirks that put a bummer on the workflow for me. 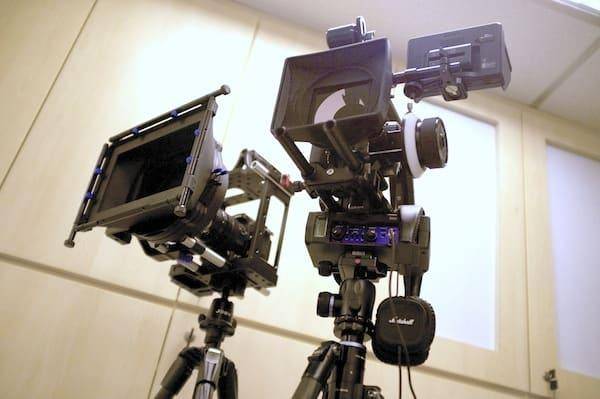 In this regard, the OM-D can work with external microphones, albeit you need to purchase a little dongle to mate with its hotshoe, the SEMA-1 Microphone Adapter, which raises the height of the camera a lot more compared to the GH2, for example. One extra item is always an extra item to lose, so this is a minus imho.

The OM-D cannot provide a “live view” to HDMI when shooting video. Somehow, despite the great image and video quality of the OM-D, Olympus did not provide a full HDMI-out capability like the competing GH2 can. What’s more, the OM-D requires an uncommon HDMI cable, rather than the usual micro HDMI to HDMI cable that the GH2 and many other DSLRs use.

The odd thing is, I have a Nikon V1 as well. This tiny consumer camera has full HD video, microphone input, HDMI-out. So… it is not inconceivable that more expensive cameras can be better designed to have such capabilities for decent videography.

The OM-D has a swivel LCD screen but is not fully articulated and cannot swing outwards, making it difficult to work with certain DSLR rigs (like the Edelkrone Modula 3 for example, especially since it cannot work with external HDMI LCD monitors either.

No camera works the same, especially with different makers tending to different design perspectives. Though we wish that the camera we purchase and use, is the right camera that offers all the bells and whistles, without compromising too many features that we need. For now, I have to work with the OM-D and the GH2 in tandem when shooting videos, and the OM-D for stills. Perhaps, until the Sony RX1 comes along.

Stalking your consumers in a shop – don’t