Innovation through the abyss of challenges

Creative innovation can be abundant in the world today, and I certainly don’t mean software. Invention is often found at the deepest of needs amidst a sore lack of resources.

I may be a gadget geek, and for the most part, I have only been an early adopter some decades when youthful exuberance got the better of me. As I grew older, I usually take a back seat as an observer for all gadgets until I really have a need, or when such gadgets get their kinks ironed out and become more pervasive.

When I first saw the Lytro camera, I was amazed at the ability of the camera to allow anyone to change the depth of field (DOF) of an image AFTER it has been shot. The camera still intrigues me today, but the proprietary player needed to showcase the images make it less useful for my work, centered around the Web and mobile devices.

Just now, I came across the website by The Chaos Collective, who enlightened me that the ability of an image to allow the changing of DOF after it has been shot, is entirely possible without proprietary equipment, because the image can be a sequence of images, also known as a video!

What the ingenious Chaos Collective guys taught me on their simple website is that to alter the DOF of an image, you simply use a digital camera capable of capturing video, with a lens capable of manual focus. So for example, let’s say we have two objects A and B, A near to me, and B farther away. We mount the camera on a tripod, and manually focus on object A nearer to me, and start the REC button to record video. Then manually focus on object B to bring it in focus, and then stop the recording. The video is then processed by the tool on Chaos Collective, and you get a nice little image that allows us create much of the same effect as the Lytro camera. Well ok, close enough at least.

What the Chaos Collective guys taught me is synonymous with the Chinese saying, “窮則變，變則通,” which can be loosely translated as all problems deep in the abyss of desperation (“poverty”), can be solved through innovation.

When we are faced with a immensely tough challenge or even a conundrum, do not despair. For in the depth of difficulty, we merely need to keep prodding on, and the wealth of creativity, invention, and innovation will spring forth. It is often just a little push ahead. And when stuck, don’t forget there are others out there willing to solve problems together. It is often so much more gratifying to solve challenges together. 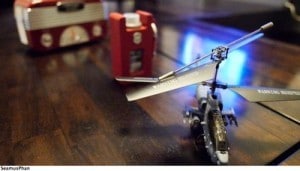 PS – The Chaos Collective page did not work with my Mac and web browser, and so I manually used the “imagemap” attribute in HTML to recreate a simpler but similar effect. I have removed the demo page I created but if you really need it, contact me.

In life and work, wait your turn and earn it

Tradition and our humanity