Niceties of language and communication

I remember my junior school days, where my mum would visit all my teachers one by one, and respectfully bowed to my teachers and asked them to discipline me under their care, and I would also bow to my teachers whenever I saw them. It was part of what I was taught to do. Today, when I see dignitaries or faith leaders, I would do the same, simply because it is part of something ingrained since young. When I need to correspond with dignitaries and elders through email or postal mail, I would take pains to research what the right salutations should be. I believe it is the right thing to do to accord formal respect to them.

For example, if I need to write to a high ranking official, I would normally address them appropriately, such as "Your Excellency", or "Your Eminence", and so on. I would never address them as "Dear so-and-so". You may be surprised at how often modern correspondence, especially from the younger generation, seemed to have done away with formal and proper salutations. Accord these elders with formal respect, and you may be pleasantly surprised at the same respect returned back to you.

Salutations may seem verbose to some, but they are beautiful expressions of language. Likewise, if you read Greek, Latin, Church Slavonic, Classical Chinese (Literary Chinese), and so on, you may find esoteric and beautiful expressions that are best described as delicate artistic expressions befitting of attention, rather than simply dismissing them as "verbose".

Further, honorifics are important. It goes far enough to place us, the senders, as people who honor those we address. For example, would we address a knighted gentleman as "Sir William" rather than "Hi William"? Or if we need to address a judge, wouldn't we address the judge as "Your Honor" at the very least? Likewise, if we write to an academic or someone with a doctorate, would we not accord him or her at least the formal respect of "Dear Dr. XYZ", or "Dear Prof. XYZ" if he or she holds such a position?

Modern texting-style messages are void of comprehensible emotive language, or full representations of emotions, and can easily be misinterpreted by others. It is no wonder text messages can confuse and confound many, and often lead to miscommunication at the least, and big confrontations at its extreme. It is no pretty sight. All too often, the efforts spent trying to salvage miscommunication or conflicts created purely from badly written texting-style correspondence can be all too daunting and exhausting, that it may just be wiser and smarter to simply write clearly and respectfully from the beginning.

The 16th President of the United States of America, Abraham Lincoln showed mutual respect in one of his famous letters written on July 13, 1863, to Major General Ulysses Grant, humbly admitting his error in judgment. General Grant later was honored as the 18th President of the U.S.A. following President Andrew Johnson. The famous letter, with respectful and warm language, is reproduced here:

I do not remember that you and I ever met personally. I write this now as a grateful acknowledgment for the almost inestimable service you have done the country. I wish to say a word further. When you first reached the vicinity of Vicksburg, I thought you should do, what you finally did --march the troops across the neck, run the batteries with the transports, and thus go below; and I never had any faith, except a general hope that you knew better than I, that the Yazoo Pass expedition, and the like, could succeed. When you got below, and took Port-Gibson, Grand Gulf, and vicinity, I thought you should go down the river and join Gen. Banks; and when you turned Northward East of the Big Black, I feared it was a mistake. I now wish to make the personal acknowledgment that you were right, and I was wrong.

Yours very truly
A. Lincoln

PS - Here's a beautiful reproduction of the painting "The Peacemakers", depicting the gentlemen on the River Queen in March 1865, with General Sherman (from left), General Grant, President Lincoln, and Admiral Porter. 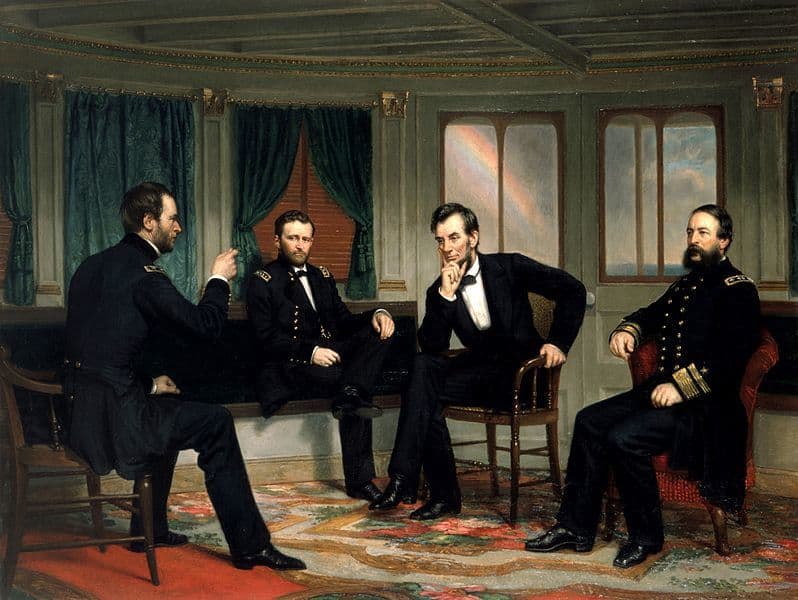 Conquer our limitations and thrive