Success comes through the long-form

How many times have we seen success? How does it look like? Is it something that can be achieved overnight AND sustainable?

Life is a meandering path, a long marathon, a journey of many turns and corners that demands all of our might and fortitude till the end. Life is never about a moment of glory only, but how we struggle and strive through the whole journey till our last breath. It is about the entire journey and how it changes us for the better till the end, and not little pockets of vainglory.

When I was a teenager, I was an artist. I enrolled in art college (the youngest student in that program in that old art school at that time) to learn Chinese Brush Painting.

The teacher was an interesting gentleman, having been a teacher in the college for a long time. There are 2 forms of Chinese brush painting – “gongbi” (the fine-stroked approach), and the “xieyi” (the rough brush strokes approach). This teacher would teach us both techniques, although each of us would find inclinations towards one approach rather than the other, or both.

The teacher would have us copy paintings he has done before, as copying paintings is one of the entry-level methods of teaching Chinese brush painting. We would copy many of his paintings laboriously, in “xieyi” and “gongbi” strokes, from themes ranging from nature, flora, fauna, people, and still life.

My nature is more free-spirited, and naturally, I would gravitate towards the “xieyi” style of painting. I did not like the “gongbi” method at all, which to me at that time, was a style of painting that pales in comparison to the “xieyi” method – which IMHO, is full of energy, raw and powerful, compared to the fine strokes of “gongbi”, which can seem lifeless and merely technical. But still, I had to laboriously put in effort to recreate the “gongbi” paintings on my own, against my personal preferences.

Then came a time when we were nearing graduation, and the teacher told all of us who remained, that he would carve a name seal for each of us. A name seal is usually a small marble (or similar) block, with the name of the person carved out in the underside. The seal would be pressed against the seal paste (usually red), and then stamped on Chinese calligraphy and paintings as a proof of the identity of the artist. 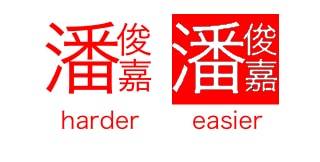 The teacher opted for the easier method of carving the name out of the surface, which is perfectly fine. But what annoyed me was what he did to my name.

The teacher carved my last character “jia-1” with a completely different character with the same sound, simply because the character he chose had very few strokes and so was easier to carve. But it would mean that what he carved was NOT my name at all. He knew that he intentionally chose that character, and not out of ignorance, and that annoyed me then because he as a teacher, always told us never to take short cuts, and that every stroke has to be dutifully copied and learned. To a young child, this hypocritical behavior was unacceptable. 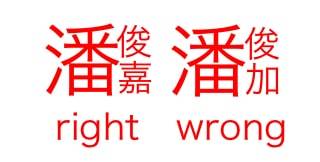 In life, when you trace the path of history, you would immediately realize, that many of the greatest minds, whether they be artists, musicians, scientists, or inventors, have labored with their heart and soul, for what they believed in. No success, especially if it is sustainable till the end, can be achieved without putting in one’s whole being into it, completely, until the last breath. And history is the best judge of that.

Smartphone video journalism for everyone

Toxic employees under the microscope