Tradition and our humanity

Tradition is a good thing, even as we migrate forward in time and technology. Tradition preserves our roots, our heritage, our culture, and our humanity.

I am all for tradition. I believe tradition trumps careless modification. Progress is not a bad thing as long as it respects the value of heritage and tradition. Progress can bring us forward, as long as it is seriously and carefully thought through, with humble and respectful consideration for humanity and its genuine needs, and not through selfish, hidden or even insidious desires.

Let me illustrate by a single Chinese character for “leaf”. 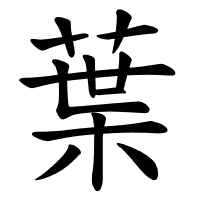 The Traditional Chinese script is “葉”, which is made of 3 parts, “grass”, “world” and “trees”. Taken as a whole, the word “leaf” in Traditional Chinese conjures up a poetic and philosophical wonder, that it means in a leaf, you will find the embodiment and distillation of the whole universe between the pasture and the trees. Taken deeper, you can see that in a single blade of leaf, you can find that nature in itself, is our universe, something we should value. It is so much more visual in the Traditional script. Even looking at a single leaf close-up, and you find intricate patterns that can only be a marvel to behold.

In our modern world, it is the same thing. Many things in life have become compressed unnecessarily. Time is compressed by KPIs (key performance indicators), which at best, are rough measurements of a much more complex world. People are measured by mere performance, rather than the true value they can bring. People demand more, sometimes ahead of what value they potentially bring to the table. Tradition, and wisdom gleamed by those who took time and effort, are sometimes sidelined by glitzy presentations of mere window dressing.

The truth, however, is that tradition is built brick upon brick, layer by layer, sweat and tears, war and peace, through generation after generation. All that experience, expertise, knowledge, and most of all, humane and compassionate wisdom, can never be negated or belittled by mere existence or mere youth.

The worrying trend is that with medical advancements, we are living longer, though not necessarily better. We can live for a much longer time than centuries before, but we may not live healthily towards the end. The world is going to be a graying world, and we need to take care of one another, like the age-old wisdom of the young looking after the old. It is tradition, but more importantly, it is humanity.

Respect experience and wisdom. Respect tradition. We might find the deepest and the most touching parts of our humanity.

Innovation through the abyss of challenges

Coffee and the art of staying happy