Tribute to Mac and Mr. Jobs

Back in 1987 I applied for a job that I didn't know anything about, and I was blessed enough to get the job. It was a job titled "desktop publishing specialist" for the exclusive distributor for Apple then.

I had always been fascinated with computers. I started programming in BASIC in the 1970s with a Radio Shack Tandy TRS-80 Model 1, and later in the 1980s with a Sinclair ZD Spectrum and an Atari ST. I dabbled with FORTRAN and COBOL too. 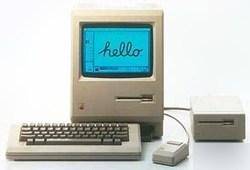 However, when I saw the Macintosh for the first time, it was an amazing little machine that went against convenion - no color, tiny screen. Its software applications were completely graphical, much like the Atari.

In the early days when I was toying with Aldus PageMaker 1.0 and Adobe Illustrator 1.0 on the Mac, it was love at first sight. I became one of the few back then, to use a mouse to illustrate complex layered vector graphics with Illustrator - automobiles, people, scenery, etc. It was great fun. I appreciated that a computer like the Mac worked in tandem with a human being, and not like the old CLI computers I used, became second nature to a visual person like me.

It was not easy selling the Mac as a DTP tool those days. It was expensive when sold with the 300dpi Apple LaserWriter. But still, those we approached, saw the ease of laying out newsletters, short-form inhouse magazines, print advertisements (especially together with Illustrator), and brochures. It was far easier and much more productive trying to do these on your own with a Mac, then trying to replicate the same results on alternative boxes. Soon, the price of the Mac didn't matter so much to those who wanted ease and empowerment, over recognized large box names then.

I went on in later careers, developing interactive multimedia and networked learning systems with the Mac, using the likes of HyperCard and later SuperCard, as well as continuing my love of the Mac as an illustration, creative design, and page layout tool. I also remember the Mac LC (the "pizza slab") fondly because it was the cheapest color Mac I could afford, and that was how I ran my tiny design studio, pitting against those who could afford expensive Mac FX towers and what not.

Even today, I am using a Mac although I do use Linux as well. The Mac is just that much more intuitive to use on a daily basis, trying to get work done, than another box. The prices of the Mac have approached its competitors, so much so that prices no longer become a crippling factor. The Mac, to me, represents the epitome of good design - it simply works, it works simply, and every part of it from the software to the hardware are elegant and understated.

I owe a great part of my career to the Mac, from selling desktop publishing solutions, to creatiing interactive media in large companies, to designing creative and marketing campaigns, to now, simply using it as a productive tool. And for that, I thank Steve Jobs for being true to his passion and belief - that a computer should be like a Mac.

Postscript
Here's a lost video in 1984 showing a young Steve Jobs launching the Mac. He was showing as much finesse and optimism for his company and the products, as he has been always. Memory eternal, Steve.