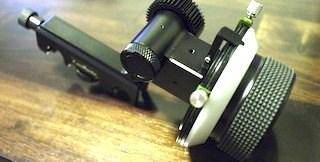 We chat about the Lanparte Follow Focus AB Stop, the HTC Windows Phone 8X, and the Fujifilm XF1 compact camera.

Lanparte Follow Focus AB Stop
A follow focus unit is an optional item for most of us who dabble with videography or DSLR filmmaking. However, it is a nice-to-have accessory if you are using a manual focus lens such as the Voigtlander/Nokton 17.5mm or 25mm lens for the MFT cameras. With the Lanparte Follow Focus AB stop, you get 2 user-configurable hard stops that are great for shooting scenes where you have 2 persons conversing, and you focus selectively on one person and then next, depending on who's speaking at that time. Visit site.

HTC Windows Phone 8X
The smartphone arena is now abuzz with the latest Windows Phone 8 offerings, such as the HTC 8X. The new phone has a Qualcomm Dual Core 1.5GHz CPU, 1GB RAM, 16GB storage capacity, 4.3-inch super LCD 2 with Gorilla Glass 2, GSM, GPRS, Edge, HSPA and WCDMA, GPS, NFC, WiFi a/b/g/n (yes, a too, unlike some others). The 8X has a 8MP AF camera with BSI sensor for low-light use, 28mm F2 lens, 1080p video recording, running off a HTC ImageChip. There is also a front-facing 2.1MP camera with F2 wide-angle lens that also records 1080p video. Sound is not forgotten, with Beats Audio and built-in amplifier. Visit site.

Fujifilm XF1 compact camera
Not everyone needs or wants a DSLR. There are many casual photographers who prefer a compact camera, such as the XF1, which combines a stylish and sleek design, while providing most casual users a nice camera to work with. No big sensor here, but sufficient for many people. The XF1 hands both JPEG, RAW and H.264 HD movies. The camera uses the 2/3-inch EXR CMOS sensor, and has a variable aperture, with F1.8 at the widest, and F4.9 at the telephoto end. Visit site.

If you have a gadget you like reviewed, contact us. We are interested in the following: cameras, computers, tablets, smartphones, video cameras, gadgets, geek toys, etc.