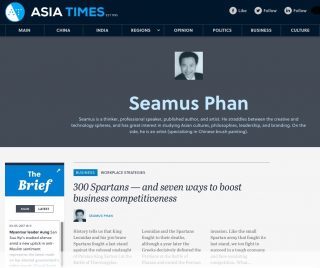 Unlike many writers, I am natively bilingual in BOTH English and Chinese (Traditional and Simplified, including the ancient language as well). I can compose and write in Chinese too, just that typing on the QWERTY keyboard takes up a lot more time in Chinese. I am also a Chinese brush painter and calligrapher. 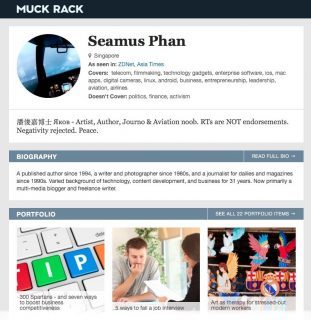 I have written professionally since 1986, from children’s books, technical documentation, training programs, journalistic expressions, to published books. I have published hundreds of technical and business articles, and authored quite a few books (including the recent “Dot Zen 2.o”, the previous co-authored “Dot Zen,” bestselling “This Body This Life” and Amazon bestseller “The Internet Webmaster Logbook”), some e-books, audio CDs and video training products. I have also been an avid blogger since the late 1990s, writing about philosophy, religion, business leadership, technology, holistic health and fitness, and so on. You can read all my ongoing blog articles here. I was privileged to have been the first Asia member of the American Society of Business Publication Editors (ASBPE), and now a member of The Chartered Institute of Journalists UK (MCIJ).

I have worked with daily newspapers, technology and business magazines as an independent journalist and contributing editor. Editors were kind to me, and commented that they could simply rely on me completely to produce analytical and news features that are newsy, insightful, and highly readable. I also write advertising and editorial copy for corporate clients. If you need punchy and impactful copy, talk to me now! Through my journalistic years, I have enjoyed interviewing many top executives of multinational corporations, industry visionaries and celebrites. Steve Wozniak (Woz), co-founder of Apple, was a memorable one.

Editorial features I have written

I have written hundreds of technical and business features and commentaries, as well as interviewed many top executives and visionaries. If you are keen to see my portfolio samples, talk to me. Here are titles of a small selection of what I have written.

I can work as an independent commentator and analyst, and co-host, for broadcast stations (TV, radio and online), if you are looking for a reassuring voice or personality with soothing and learned authority, and a discernible optimism.

I have a radio and TV-friendly voice, having used my voice and personality on stage and elsewhere for more than two decades, including broadcast work. Unlike “pure” radio voices and TV faces, I bring decades of business, professional, technology, and consulting experience to the table, becoming a credible partner to your broadcast personalities on air, “live”. You can count on me to be quick-thinking, with reasoned and lively discussions, and can fill in gaps whenever needed.

I have co-hosted on USA’s ZDTV Radio, TechTV Radio, and TechTV Live. I have also co-hosted segments on 93.8FM (English) and Capital 95.8FM (Mandarin/Chinese).